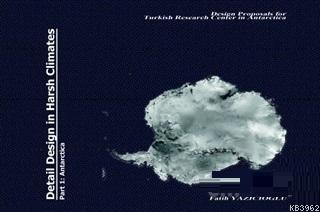 Antarctica and its surroundings allow for conducting scientific research in several areas, with features of the world that are nowhere else to be found. It is thought that Antarctica, which holds 70% of the world's fresh water reserves, is also rich in mineral resources. In 1995, Turkey became a party of the Antarctic Treaty, originally signed in 1959. Of the 53 countries that are parties to the treaty, 29 have a say in the continental government. Countries that want to have such status in continental management need to establish a base in the region and conduct scientific research. In the last two years, Turkey has been sending researchers from Turkish universities and conducting scientific studies. For Turkey to become one of the leading countries in the continent, establishing a research station is quite important.
This book is about the design proposals generated by the author and his students for the first Turkish Research Center in Antarctica. In order to make students get more interested in the course a scenario has been adapted to the course work brief. The scenario is as follows:

Turkish government has commissioned you to design a research station for the first group of Turkish scientist, to be built in one of the coldest and most arid regions on earth; the Antarctica. Seven scientists will first use the research station in summer and in time, the number will be increased to twenty five in summer and thirteen in winter. The research station should be designed to be moved, as any type of in situ construction is very difficult in the region. As the region is dramatically important for the sake of the world, the station should minimize the production and use of electric, water, heat, etc. In addition, the government wants the station to be designed with a sustainable approach to be a model for the other nation's stations. The government's long-term intention is to have a minimum, zero energy and carbon neutral station. The station will comprise of a living room, dining, kitchen, bedrooms, bathrooms, technical spaces and 3 laboratories.

At the end seven inspiring design alternative is designed, and detailed. All of which has a creative function, conceptual design idea, and detail solutions and documentation which are almost ready for construction.