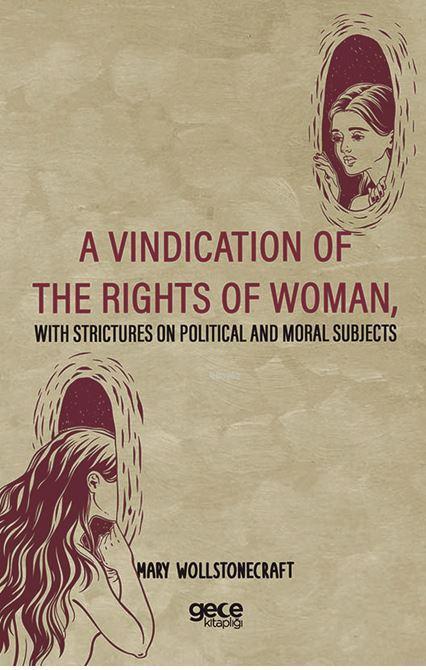 Emeği Geçenler :
A Vindication Of The Rights Of Woman, With Strictures On Political And Moral Subjects

In the present state of society, it appears necessary to go back to first principles in search of the most simple truths, and to dispute with some prevailing prejudice every inch of ground. To clear my way, I must be allowed to ask some plain questions, and the answers will probably appear as unequivocal as the axioms on which reasoning is built; though, when entangled with various motives of action, they are formally contradicted, either by the words or conduct of men.
In what does man's pre-eminence over the brute creation consist?
The answer is as clear as that a half is less than the whole; in
Reason.
What acquirement exalts one being above another? Virtue; we spontaneously reply.
For what purpose were the passions implanted? That man by struggling with them might attain a degree of knowledge denied to the brutes: whispers Experience.
Consequently the perfection of our nature and capability of happiness, must be estimated by the degree of reason, virtue, and knowledge, that distinguish the individual, and direct the laws which bind society: and that from the exercise of reason, knowledge and virtue naturally flow, is equally undeniable, if mankind be viewed collectively.
The rights and duties of man thus simplified, it seems almost impertinent to attempt to illustrate truths that appear so incontrovertible: yet such deeply rooted prejudices have clouded reason, and such spurious qualities have assumed the name of virtues, that it is necessary to pursue the course of reason as it has been perplexed and involved in error, by various adventitious circumstances, comparing the simple axiom with casual deviations.
Men, in general, seem to employ their reason to justify prejudices, which they have imbibed, they cannot trace how, rather than to root them out. The mind must be strong that resolutely forms its own principles; for a kind of intellectual cowardice prevails which makes many men shrink from the task, or only do it by halves. Yet the imperfect conclusions thus drawn, are frequently very plausible, because they are built on partial experience, on just, though narrow, views.